LC3 is an innovative blended Portland cement that includes addition of metakaolin (calcined kaolinite clay) and limestone. The main components of LC3 are clinker, calcined clay, limestone and gypsum.

Calcined clay and limestone are already commonly used as Supplementary Cementitious Materials (SCMs). The major innovation in LC3 is to combine the use of abundantly available low-grade kaolinite clay with a further 15% of limestone, which together have a synergetic effect and reach a similar performance as OPC - CEM I.

The additional alumina in the metakaolin reacts with the ground limestone, leading to a less porous material, and therefore providing equal strength with higher levels of clinker substitution. 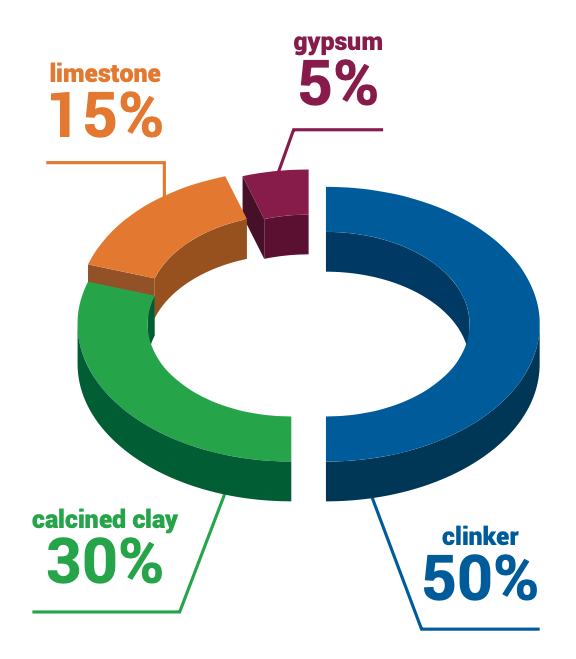 Clays are the weathering products of all rock types and, as such, are abundantly available close to the Earth’s surface in all geological settings. They are made up of silicon and aluminium oxides, which together constitute around ¾ of the Earth’s crust. The most suitable clay types, containing kaolinite, are typical of tropical and subtropical environments, where most of the increase in demand for cement is forecast to occur. Kaolinite clay occurs in abundance in soils that have formed from the chemical weathering of rocks in hot, moist climates.

The map below gives an overview of geological zones on the planet. Clays are mainly found associated with Alfisols (light green) and Ultisols (yellow), confirming the abundance of clay, especially in India and South East Asia.

Kaolinite content needed for LC3 is much lower than for pure kaolinitic clays used in the ceramic or paper industries so use of such ‘low grade’ clays would not compete with demand for resources by other industries. Our experience in India has shown that abundant amounts of low-grade clays exist as an overburden in existing quarries, currently regarded as waste. Use of such resources would neither require opening of new quarries nor deplete agricultural soils.

Limestone is always available at cement plants. LC3 blends typically contain around 15% limestone, but materials unsuitable for clinker production can be used. For example, high dolomite content produces periclase during clinker production, which causes expansion. Such materials can be utilised safely in interground applications, leading to more efficient use of limestone quarries. Depending on the exact scenario, the amount of cement that can be produced from the same identified limestone reserve could be increased two-fold.

Further Reading from the Thesis of Mathieu Antoni at EPFL

This website uses cookies to improve your experience while you navigate through the website. Out of these cookies, the cookies that are categorized as necessary are stored on your browser as they are essential for the working of basic functionalities of the website. We also use third-party cookies that help us analyze and understand how you use this website. These cookies will be stored in your browser only with your consent. You also have the option to opt-out of these cookies. But opting out of some of these cookies may have an effect on your browsing experience.
Necessary Always Enabled
Necessary cookies are absolutely essential for the website to function properly. This category only includes cookies that ensures basic functionalities and security features of the website. These cookies do not store any personal information.
Non-necessary
Any cookies that may not be particularly necessary for the website to function and is used specifically to collect user personal data via analytics, ads, other embedded contents are termed as non-necessary cookies. It is mandatory to procure user consent prior to running these cookies on your website.
SAVE & ACCEPT